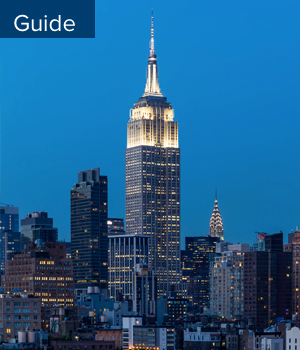 A guide to HR compliance, payroll, and benefits in the Empire State.

Out of all the places to practice HR in the country, few are as challenging as New York. From the state’s robust paid family leave mandate to its annual minimum wage increases, the Empire State has always led the pack on pro-employee legislation.

Whether you’re an HR professional in Brooklyn or in Buffalo, we’ve put together everything you need to know about the complexities of HR, payroll, and benefits in New York.

Piecing together the New York HR compliance puzzle is no small task. The state is usually one of the first to adopt landmark, pro-employee laws, so be careful not to blink or you may miss something important. Here’s a look at a few new laws effective this year:

As of January, New York employers cannot discriminate or retaliate against employees or their dependents based on “reproductive health decision-making.” Employers are barred from accessing personal information pertaining to an individual’s reproductive health decision making, like whether they underwent a fertility-related medical procedure or used family planning services, birth control drugs, emergency contraception, an STD test, etc. Employers must also update company handbooks to include employee rights and remedies under the law. This law follows on the heels of the New York City Council adding “sexual and other reproductive health decisions” to the list of protected categories under the New York City Human Rights Law back in 2018.

This May, NYC employers will be prohibited from requiring job applicants to undergo a pre-employment drug test that screens for marijuana. The ban only applies to pre-employment tests, so employers could test existing employees if desired. Employers can continue to issue pre-employment tests that look for unlawful drugs, other than marijuana. A few industries and professions are exempt from the law, like police officers, construction workers, truck drivers, etc.

New York is the fifth state to pass its own paid family leave law, following in the footsteps of California, New Jersey, Rhode Island, and Washington. In 2020, New York employees can take up to ten weeks of leave to care for a sick family member, bond with a child, or provide support during a family member’s military deployment.

New York’s paid leave law is one of the most generous paid leave plan in the country. It’s more comprehensive than the national Family Medical Leave Act (FMLA), as it guarantees job security and pay while an employee is out. Plus, more individuals are eligible for the state’s paid leave than under the FMLA because all companies, regardless of size, must offer the benefit. Lawmakers hope that the law will alleviate much of the burden of having to choose between caring for a family member and risking economic security.

Businesses shouldn’t reach for their checkbooks just yet—the benefit comes at no extra cost for employers. New York paid leave is funded by a small, weekly employee paycheck deduction. In 2020, the employee contribution is 0.27 percent of an employee's gross pay per pay period, not exceeding $196.72 per year. All employers have to do is collect the payroll contributions, meet state requirements, and handle employee requests.

Before getting too comfortable with the program, keep an eye out for upcoming changes. This year, employees can take up to ten weeks of leave, that's a two week increase over 2018's eight week offering. The amount of leave will continue to increase incrementally until 2021. By then, employees will be able to take up to 12 weeks leave, paid at 67 percent of weekly wages. The current offering is ten weeks paid out at 60 percent of average weekly wages. Employee wages during leave cannot exceed $1,401.17, or 60 percent of the Statewide Average Weekly Wage.

Note that state employers are not required to offer paid or unpaid vacation. While the state doesn't have a PTO minimum requirement, keep in mind that crafting a more generous offering or even opting for unlimited vacation can improve employee engagement and trust.

With unemployment at record lows and baby boomers approaching retirement, it’s never been more difficult for employers to attract and retain top talent. It’s also getting more difficult to know what you can and can’t ask your job applicants.

A growing number of states are banning salary history questions, and New York is no exception. State agencies can no longer ask applicants to share their current or previous compensation until a job offer has been formally extended. In New York City, even private businesses are barred from asking. These bans are designed to combat the gender pay gap by breaking the cycle of underpaying women and minorities.

New York has also “banned the box” for all state agency jobs, hoping to give applicants with criminal records a fair chance during the hiring process. The ban prevents state agencies from including a checkbox on job applications asking if applicants have a criminal record.

Ban the box laws also prevent employers from asking about criminal history during the interview process and for refusing to hire candidates based on a prior conviction unrelated to the position. While New York’s law only applies to the public sector, some large cities prevent private sector businesses from asking as well. Be sure to stay up-to-date on the latest city regulations so you don’t find yourself in hot water.

Regardless of what state you work in, navigating payroll compliance can be a challenge. In the Empire State, it’s a whole new ball game.

In 2016, Governor Andrew Cuomo signed a bill that will gradually increase New York’s minimum wage to $15 per hour over the next few years. These increases won’t be felt uniformly—New York City, Long Island, Westchester, and the rest of the state all have differing rates to compensate for the disparate cost of living in those regions. At the end of 2019, the state minimum wage increased to it's current rate of $11.80/hour. Nassau, Suffolk, and Westchester county minimum wages will increase to $13, while New York City's will increase to $15 for companies with fewer than 10 employees.

* Starting in 2021, the NYSDOL will publish annual increases on or before October 1 until the wage ultimately reaches $15.00.

As is the case elsewhere in the country, New York employees who classify as nonexempt must earn one-and-a-half times their regular rate if they work over 40 hours a week. That said, the state is unique in how it determines whether employees should be classified as eligible for overtime. While the minimum salary for an individual to be considered exempt is $35,568 at the federal level, New York has a much higher threshold: $43,264.  What’s more, this number is set to automatically increase every December until it reaches $58,500 on or after December 31, 2021. This means a much larger share of New Yorkers are eligible for overtime than workers elsewhere in the country.

If only minimum wage and overtime were the only factors payroll administrators had to worry about. Even for New York payroll veterans, managing compliance in other states or globally can be a daunting task. Oftentimes, HR professionals turn to outside payroll vendors help keep their heads above water. Just be sure to thoroughly vet your vendor to make sure they’re current on the latest state and city regulations.

While New York and California are both known for passing some of the country’s most progressive labor laws, their major cities are known going even a step further.

In the city that never sleeps, you can’t hit snooze on compliance. New York City is a particularly big driver of change in the Empire State. It currently has more robust salary and criminal history bans, and just passed the strictest anti-harassment ordinance in the country. As of 2019, NYC became the first place in the state to have a $15 an hour minimum wage.

Other New York counties have jumped on the “ban-wagon.” Albany, Suffolk, and Westchester counties have salary history bans and have embraced ban the box regulations that go beyond the state’s. While Westchester county’s criminal history ban currently only applies to local government positions, local lawmakers are considering extending the ban to private companies as well.

While New York is typically thought of as a progressive state, cities and counties are usually the trend setters when it comes to new labor laws. Changes in these areas are usually a good indicator for what’s to come statewide.

Staying in the Know

Lady Liberty and breathtaking waterfalls aren’t all that New York is known for. The state has a reputation for taking the lead on groundbreaking legislation. But with all that change, it can be difficult to stay on top of every new labor law. For companies with workers in different cities and states, this holds particularly true.

Want to stay current with the latest HR news? Subscribe to the Namely Blog for stories covering New York and beyond, including tips and advice from fellow HR professionals—delivered straight to your inbox, every week.